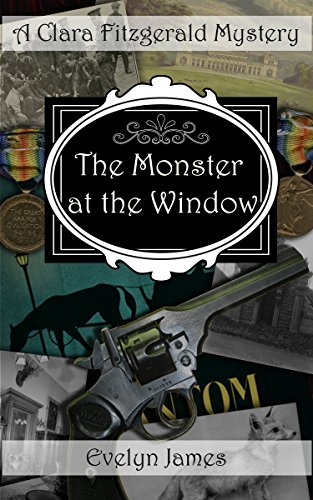 In the middle of a stormy night, photographer Oliver Bankes runs into a man who has been dead three weeks.

Terrified, he seeks out Clara Fitzgerald, Brighton's first female private detective, and draws her into a supernatural mystery revolving around the Howton family and their belief that one of their relatives has risen from the grave.

Ever practical, Clara is determined to prove that the dead remain dead, and that the late Harvey Howton is not absconding from his tomb at night to torment his family. In the process, she discovers a family in deep turmoil and a web of lies and deceit that is tearing them apart. But when a real murder occurs, Clara realises that every member of the family is implicated and now she has to shift through centuries of family legends and traditions to prove that at the heart of this mystery is no ghost, but a living, breathing man with murder on his mind.

The Monster at the Window is the eleventh book in the Clara Fitzgerald series and is published by Red Raven Publications - find us on Facebook!